Every year I attend the Cutlers Feast, held usually sometime in May, as representative of the Jewish community of Sheffield. The only occasions that I can remember not attending was when it coincided with Shavuot. The feast is a grand affair probably the most prestigious in the Master Cutler’s diary. This year was a little different as in addition to representing the Jewish Community I also attended as Chaplain to the Master Cutler our very own James Newman. So Thursday 13 May Faige Rochel (a first for her) and I got ourselves dressed for the occasion and waited for Selwyn and Judith Burchhardt who were also invited to pick us up. 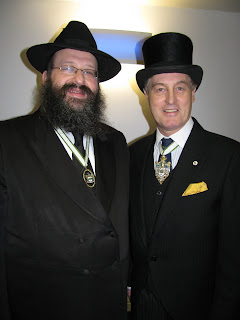 ffice and then together with my wife we made our way towards the stairs. We were greeted by a Guard of Honour standing to attention on the grand steps leading up to the reception rooms and main hall. Half way up the stairs you are given a booklet containing all the details of the night’s events including a table plan. At the top of the stairs a toastmaster presents each person to the three dignitaries waiting to receive you namely the Master Cutler, who is your host, and both the Senior and Junior Wardens. On this occasion the Senior Warden was in hospital so only the other two were in waiting. For the first time ever the host at this notable function was a member of our community and I felt a special thrill to be greeted by him especially as I was to be saying grace.

There are three reception rooms and with the invitation comes a coloured card indicating into which room one should go. We went into ours and mingled with the guests striking up conversations here and there as most people are curious to know more about Judaism or Rabbis. In the hall a quartet played familiar classical pieces. Slowly the room filled up then at the appointed hour the beadle invited everyone to take their places in the main Banqueting Hall.

I was siphoned off to one of the now empty reception rooms with the principle guests to pose for a photograph while people were finding their places. When done I had to get to my place fairly smartly so as to be ready to say grace as soon as the procession came in (one look from the ‘Colonel’ was sufficient to send me scurrying).

The toastmaster banged his gavel and the hall went quiet as he announced welcome to the Master Cutler and his principle guests. On the balcony were a trio of trumpeters from the police force who played a suitable fanfare to accompany the entrance of the procession. Moments later after handing me a microphone the toastmaster announced, “Pray silence for the chaplain to the Master Cutler who will now say grace” 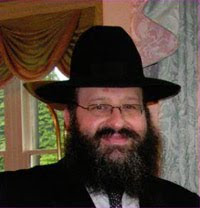